As part of my Diploma Project for zone 0 (My home) I'll be removing the clutter that's accumulated. My preferred choice is to give as gifts the items I've decided to part with.

I had not completed any fiction book in my life untill my early twenties. The first being Magician by Raymond E Feist. After which I devoured everything he had written. Every one a used pre loved copy purchased on ebay or at an independent store. My younger brother then went through them all.

Now I hoped to re read them all at some point. But decided I'd share his works of fantasy by gifting them all to a work of college who also is a fan of the genre. This act would be covered on the permaculture ethic of fair shares. Also described as returning surplus to people or the earth.

When I decide to reread any of the books. I'll just borrow them from the library. 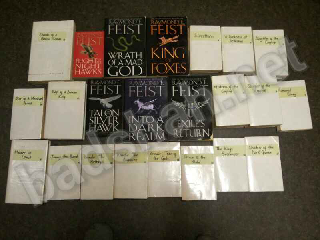