I've used a few varieties of mint as a suppression ground over in one of my garden beds. The idea being I'll decide which varieties I'll keep before I cover the whole bed in cardboard/ newspaper and lasagne mulch it.

The mint turf war is being won by spearmint, which tastes best in tea. Aue de cologne mint in second place. Very strong aroma, not good in tea, peppermint in third place but this is good for tea, but weaker then spearmint and pineapple mint a very weak fourth in the turf war. Chocolate mint did not survive the year. I never got chance to brew a cuppa with this. But seems the least invasive of the lot I planted.

That's what pineapple mint looks like (see pic).
Sipping some green tea with it in. If you're growing for tea, then I recommend spearmint. But be aware it is also the most invasive. So plant in a pot to stop it spreading. 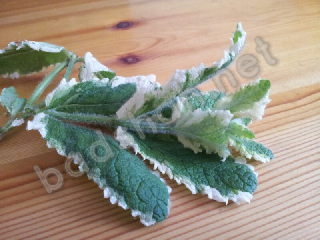